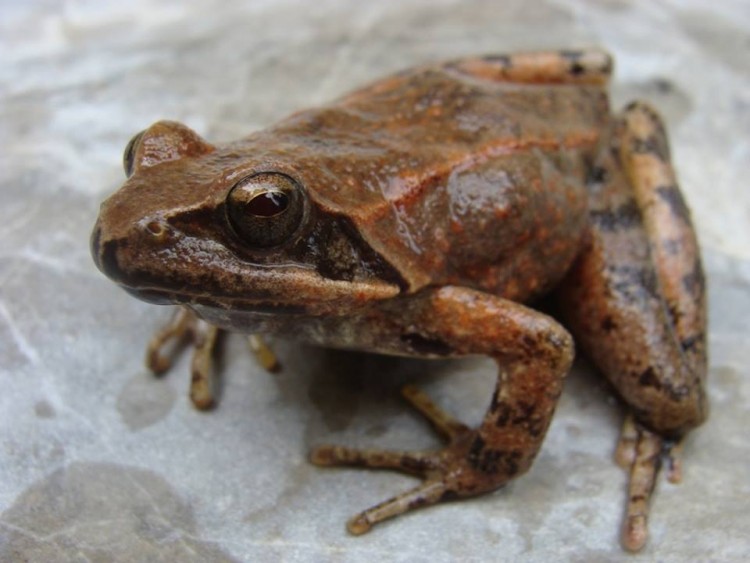 Brown frogs include several frog species of the palearctic region with strong morphological similarities known to belong to the group of Rana temporaria . The Blakan peninsula provided shelter for species survival during ice age and represents the area were most brown frog species retreated during this period; biogeographic barriers of the "hilly" Balkans contributed to their unclear speciation from that time.

In within the group of brown frogs of this area, there are three species of broad interest for this study: Rana dalmatina, Rana temporaria and Rana graeca. Rana graeca is a Balkan endemic frog restricted to canyons of rivers and their wider shores, therefore having a much smaller areal compared to two before mentioned Rana species that occupy wider sorts of habitats. Regardless this fact, there are areas where the three Rana species coexist together due to habitats overlap. These areas represent potential hybrid zones were evolution can be observed in its action.

The main discriminative characteristics between the three Rana species are the color of the ventral side of the body; length of hind leg and shape of snout. The metatarsal tubercule is highly variable within the species but it is also used as a discriminant. Hybrids, if they occur, might have interim characteristics. Little is known about population interactions and their evolutionary relationship. This study contributes in providing new scientific data concernign the issue.

- Collection of distribution data and measurments of 32 morphological characteristics (27 quantitative and 5 qualitative) of all three Rana species deposited in herpetological collections of museums in Wienna , Budapest and private collection: "Lelo" (Sarajevo). Tissue samples of R. graeca from museum collections were also taken.

The three Rana species are vicariant (Vicariance represents the existence of phylogenetically close species in different geographical areas as a result of the formation of natural biogeographical barriers within a previously integrated area).The main aim is to define the position of Rana graeca within other species of Rana in central and southern Europe using both: morphology and genetic data.

Populations of R. graeca were sampled in various river canyons and mountain streams in B&H throughot wide part of its distribution areal.

DNA was extracted from tissue samples ; both: mtDNA and nDNA are used to identify phylogenetic relationships between these samples and samples collected in the museums. Alltogether they covered the entire distribution areal of R. graeca (B&H, Serbia, Montenegro, Albania, Kosovo, Macedonia, Bulgaria, Greece) .

Rana graeca is listed on Annex IV of the EU Habitats Directive and Appendix III of the Bern Convention. Although It occurs in a number of protected areas along its distribution areal, its habitat (especially in B&H) is SERIOUSLY threatened by the enormous increase of hydropower constructions in the country. The loss of suitable habitat is the major threat to this species. It has no CITES status.

Populations of R. graeca have hard time coping with polluted rivers and streams. They are included in the national red list of threatened species.