As the focus of conservation biology moves from protection of species and habitats to the protection of the most important functional ecosystem services we developed this project that will protect functional ecological services that provide amphibians in anthropogenic habitats. Through education we will try to raise the awareness on the importance of amphibians in agroecosystems and promote these organisms as a solution for pest management control with the final aim to reduce the use of chemical substances and increase the number of individuals in populations of endangered lowland amphibians species in B&H such as: Triturus dobrogicus, Pelobates fuscus, Bombina bombina.

Agricultural surfaces occupy large territory of Bosnia and Herzegovina (B&H) as they play an important role in the state economy. The most important fact, in the biological aspect, is that they represent a biotope for many animal species which are under constant anthropogenic pressures. The biggest anthropogenic impact in agricultural ecosystems of B&H is the intensive use of different types of chemicals (e.g. pesticides, insecticides) which significantly decrease biodiversity, disrupt,
and contaminate food webs. Amphibians are under the greatest impact of this anthropogenic pressure because chemical contamination induce body malformations through genetic defects in the embryogenesis. Malformations impair mobility and individuals usually do not survive to adulthood. Chemical effects on agroecosystems also reduce the number of invertebrates that represents the basis of amphibians’ diet. These chemicals have contradictory effect: The target species (pests) should be destroyed by this action but often survive and subsequently their population are increased due to reduction of competition, reduction of the number of their predators, and developed chemical resistance.

A major topic in our long-term study on amphibians is their role in food webs (role as predators and prey) in agroecosystems. Results of diet study will show us the presence and quantity of insects considered in agriculture as pest species in the diet of target amphibian species. These data will be used to model the importance of amphibians in regulating food webs (biomass transformation) and the evidence of pest presence would be used as proposal for integrating amphibians in pest management control in future maintenance of agroecosystems. As we promote amphibians as a solution in Integrated pest management (IPM) systems we will preserve arable lands by reducing the harmful anthropogenic impact that will protect all species found in these areas and strengthen/increase the population trend and expand food chain in zoocenosis. The most important outcome will be the education of local people (primarily farmers) in this matter, which leads to increased awareness of the importance of amphibians as friendly species in agriculture ecosystems. IPM has never been used in B&H, and the local people (farmers) are not familiar with the ways of working in applied ecology.

Educational poster named "Pond on arable land - a habitat for friends of agriculture"
describes the positive impact of the aquatic ecosystem on the biodiversity of anthropogenic habitats through the food chain (author & design: Zimić A.)

We carry out three field investigations in the Posavina area at the sites of Gromiželj and Čardak where we conducted an active search of terrain for species living on cultivable surfaces. The most common species was Pelobates fuscus (common spadefoot) as we expected due to the fossorial way of life. In addition to this species, we also found several others: Bufo bufo (brown toad), Bombina bombina (fire-bellied toad), Hyla arborea (European tree frog), Pelophylax ridibundus (marsh frog) and Triturus dobrogicus (Danube crested newt). As planned, we also did the field investigation in the Mediterranean part of Bosna and Herzegovina – Popovo field and Blagaj. After active search of terrain for species living on cultivable surfaces we manage to find only one species of amphibian: Bufotes viridis (green toad) and several species of reptiles which could also have a significant impact on the invertebrate fauna in cultivated lands: Podarcis melisellensis (Dalmatian wall lizard) and Pseudopus apodus (European glass lizard). These data will be very significant in future planning of researches.

We performed stomach flushing method on 124 individuals of Pelobates fuscus. 49% of individuals (n = 60) had a content of animal origin in their stomach. Vegetation remains was found in 20% analysed individuals (n = 21), so as the minerals (n = 10; 10%) and soil (n = 6; 7%). The total number of prey individuals in females is 97 (Mean 3.2), while in males is 103 (Mean 3.7). Three phylum representatives were identified: (1) Arthropoda with 164 individuals representing 80% of the sample, (2) Mollusca with 29 individuals with 14% and (3) Annelida with nine individuals or 5% of the sample. Only 1% of animal material was unidentified. Within the phylum Arthropoda significantly stands out the members of the class Insecta (47%) and Diplopoda (46%). Food analysis confirms that P. fuscus is a generalist, but two facts seems to be quite interesting in their diets. First one is the presence (in very large percentage) of animals from the class of the Diplopoda. They are known to secrete some toxic compounds such as alkaloids, phenols, hydrogen cyanide, tepenoida and benzoquinone. The second, and the most significant result are findings of representatives of the families Cydnidae (Heteroptera) and Elateridae (Coleoptera). They are known as a serious agricultural pests which are difficult to remove, even with insecticides. Since they do not have serious natural predators, P. fuscus may prove to be very effective predator and can be used in integrated pest management programme. 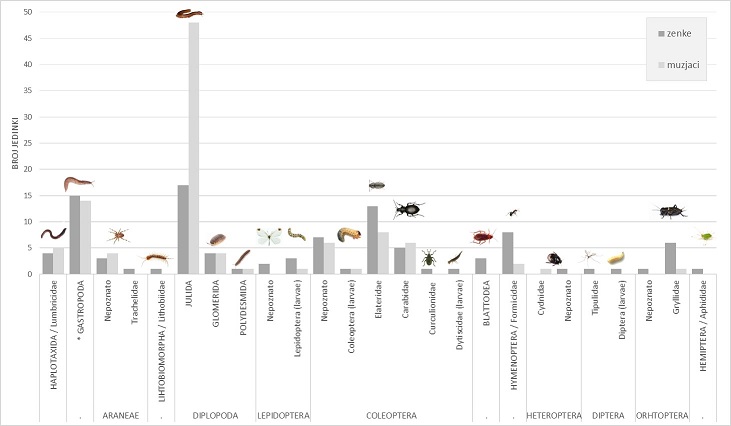