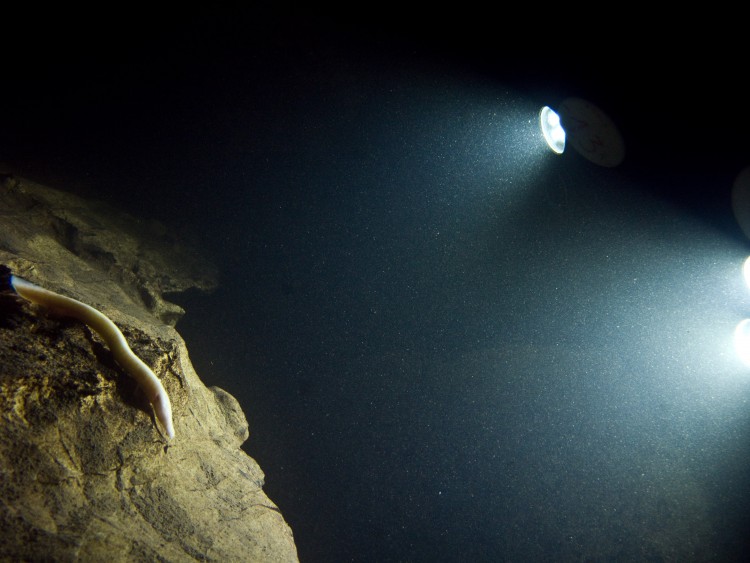 "From all that is necessary to gardens, water  is the most important thing, but the most easily contaminated. Because neither soil, sun, nor wind, which together with water feed all that emerged from the ground, can not be polluted, can not be taken to another place or beeing stolen, while the nature of the water is such that all of this is possible. Therefore, it requires a law to protect it"- Plato, Laws, Book VII.

Lead partner of the PROTEUS Conservation project is the Croatian Herpetological Society - Hyla (project leader: dr. Sc. Dusan Jelic) . BHHU: ATRA is a regional associate. Hereby we present project activities that are conducted in BiH, while more information on the regional project can be found here. We thank the authors for allowing submitting their olm pictures.

The Olm - Proteus anguinus,  is an endemic species inhabiting the underground freshwater habitats of the Dinaric Karst. It is a tailed amphibian as are salamanders and tritons (newts). Its distribution is in Slovenia, Trieste in Italy, Croatia and Bosnia and Herzegovina (BiH). Recent data suggest that it inhabits also the area of ​​Montenegro.

Only few people are familiar with the fact that BiH is one of the richest countries inhabited with the olm or, as locals say,  "human fish". In BiH it is known to inhabit three major regions: North West BiH, West Herzegovina and Eastern Herzegovina (Herzegovina reffering to the south part of the country). The habitat types in BiH are several river basins of: Trebišnjica, Trebižat, Una, Sana and their smaller tributaries. In BiH, there are more than 100 sites that are registered for olm presence, out of which 55 certainly confirmed, 41 potential sites and 32 literature findings (not confirmed over 30 years).

Data on olm distribution and biology are rare, since their habitat is often unreachable. The olm is the most recognizable representative of endemic underground fauna of the Dinaric Karst. Despite the events when high underground water pressure pumps out individuals from the underground karst through sink or estável in karst fields, the only access to this cave salamander habitats is diving in underground systems. It is of vital importance of this project to establish close cooperation with diving teams that conduct distribution and monitoring activities

Since May 2014 in Bosnia and Herzegovina (BiH) intensive field research has started along entire olm distribution areal with the ultimate aim of protecting this resource and its habitat. The project aims to define a clear distribution of species in BiH, and to start monitoring of chosen populations. Part of the project involves the promotion of the proteus as a unique animal resource. These activities are necessary for the establishment of an action plan for the protection of the proteus and increase general awareness of local communities and associate partners. The project BHHU ATRA has the task to:

- Organization of olm symposium and educational workshops across the country

Field studies have been carried out in all three regions of B&H inhabited by the olm: In northwestern B&H research was done in collaboration with the French Cave Diving team, Uroš Jelić and Nermin Hatibović (Speleoclub: Source Sana); In Eastern Herzegovina research was conducted with help and collaboration of the association Devon Karst Research Society (UK) and  Hungarian Caudata Cave Research team; In Western Herzegovina in cooperation with Esad Humo and Zoran Vlaho from the Emergency Rescue Service. More then 90 proteus localities have been visited so far.

During investigation of each site: (a) GPS coordinates were taken , (b) each system was photographed and classified based on its (geo)hydrological role/function (c) interviews with local residents were made. In this way, we gathered a big number of new data and revised the old once. We managed to clarify the picture of current distribution of olm in our country and we have identified the basic threats for population survivorship.

Underground Dinaric karst represents a huge reservoir of fresh water. Popovo polje with the cave Vjetrenica in South of BiH, are one of the most popular olm locations , beneath which there is a hidden labyrinth of caverns dwelling this fascinating animal. After heavy rains the water flows from surrounding hills and floods the fields which are rich of geomorphological structures such as: pits, sinks, estavels...Through these structure the water enters in the underground cavities that are the habitat in which the olm hides. All fields inhabited by the olm work on this principle: Fatničko, Dabarsko, Jelašnička and others.

According to IUCN criteria of endangered species, the olm is classified as vulnerable (VU). The species in on the Annex II of the Bern Convention and Annex II and IV of the Habitat Directive, which makes it by default a NATURA2000 species but with no CITES status. Olm is protected by law in Slovenia, Italy and Croatia, while in BiH species is not protected even though it is on the red list of the country were it is proclaimed as Endagered - EN.

Olms is threatened primary because of its limited range and small population size. The greatest threat to the survival of species represents economic development - industrial and agricultural pollution, the negative impact of mankind on underground habitats, and collectors. The construction of hydro-reservoirs and power plants, water collectors, groundwater drainage systems represent the principal threat to proteus survival because they are a direct attack on its habitat. Unfortunately, almost every major system in Herzegovina inhabited by the proteus is beeing used by mankind in the described purposes or plans to be destroyed in such way. Among all, it is important to mention the project: Upper horizons which is fatal for entire Herzegovina area and olm habitat since it would turn it into desert. Reservoires of drinking water and olm habitat would disappear forever.

Sewage systems and pesticides used in agriculture due in underground Remetić so sensitive systems that inhabit the human fish. Any small change in the parameters of habitat poses a serious threat to its survival because it is a very sensitive type with a narrow valence variation of chemical and biological parameters that are necessary for its normal functioning.

This fascinating and unique creature is the longest-living amphibian in the world - it can live more then 60 years!

Because of longlifespan, bright skin coloration and the fact that it reaches sexual maturity atfer 14 - 16 years, the local name for the olm is known to be: "human fish"  - Čovječja ribica.

The female lays around 70 eggs (during 25 days), from which the vast majority fail to develop and usually only two individuals hatch.

It can survive without food up to 96 months (8 years)!

Despite the bright colored olm, there is also its black variation: Proteus anguinus parkelj - These individuals were only found in two sites in southeast Slovenia.

Scientists from Slovenia and Hungary successfully developed an environmental DNA method that could confirm the presence of the olm in underground systems without the need of diving. The technique is based on the isolation and amplification of DNA from large amounts of filtered water of the underground system which is suspected to be inhabited by Proteus.

Other activities within the project

As an introductory activity of the Proteus project in B&H, we organized the Proteus symposium in Trebinje ( "capital city" of proteus in BiH) in June 2014. The symposium ("Underground world of the Dinaric karst") was attended by all olm researchers from the Balkans and beyond who have shared their experiences, knowledge and further work plans. Thanks to the symposium, many research groups have been concretising their cooperation and established new projects. More information about the symposium can be found here.

Since summer of 2015, divers Zoran Vlaho and Esad Humo started monitoring activities in Western Herzegovina in localities Vrioštica, Jasenice and Kajtazovina, which represent one of the few proteus sites of this area in which it is possible to dive. Divers Uroš Jelić and Nermin Hatibović together with the French divers performed population monitorings of northern B&H on localities: Oko and Krušnica. Monitoring of cavern systems is based on transects where divers place a line of 100m and count along observed individuals.

In the educational segment of the project, several lectures on the biology of "the human fish" were held at the Faculty of Science in Sarajevo and Banja Luka (Lecturer: Goran Šukalo). The youngest had also the opportunity to hear what it looks like the underground world of the olm in their hometown: Over 40 childern of elementary school: "5 October" in Sanski Most attended the lecture and with big interest they were asking lots of questions. Education of the youngest is an extremely important component of conservation projects, and special attention and love should be devoted in this aspect of work.