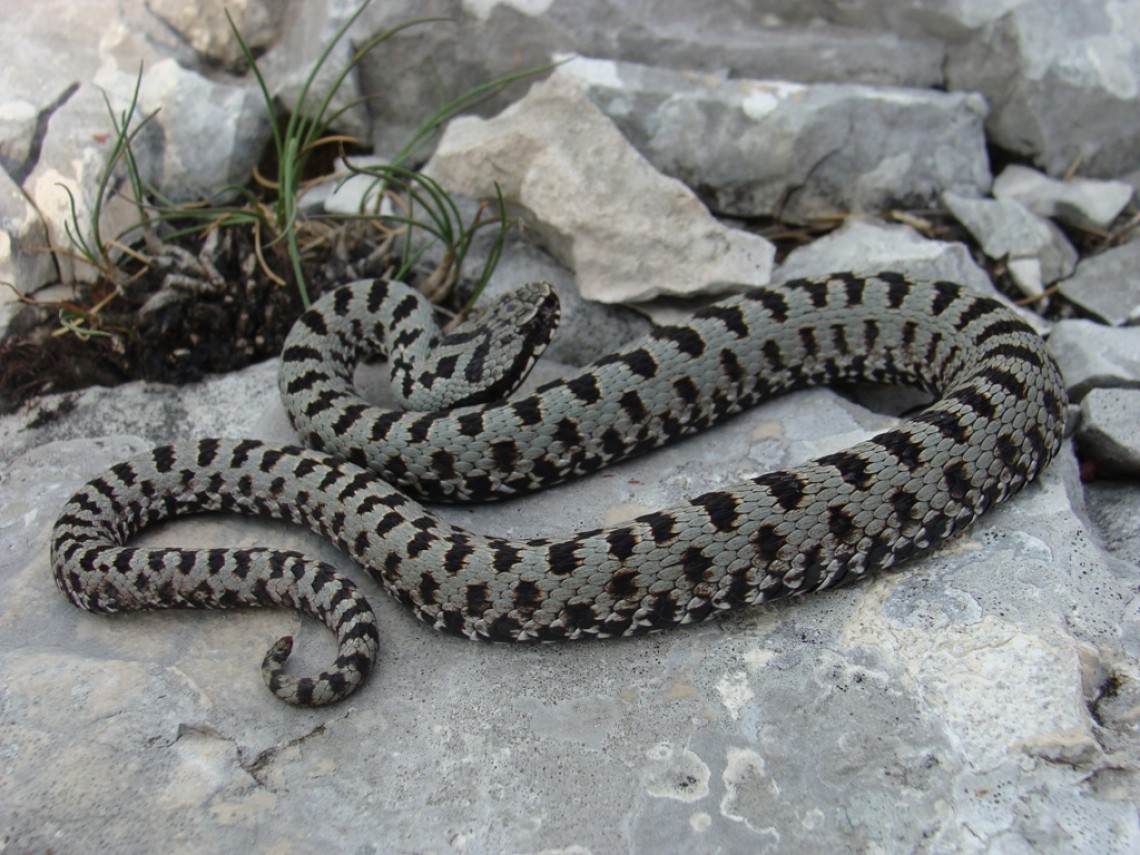 Several adder subspecies have been described, and some of them have an unresolved taxonomic status. Vipera berus berus is a subspecies that occupies most of the range of this species, V. b. bosniensis inhabits the Balkans, V. b. sachalinensis is found in Russia and the Baltic, and V. (b.) nikolskii is sometimes referred to as a separate species and inhabits Eastern Europe. During evolution, populations in the Italian Alps, the border area between ​​Switzerland and Italy, northern Slovenia, and most of Austria are the first to diverge from other populations and show significant differences from V. b. berus. According to many authors, these populations should be separated into a new subspecies. On the other hand, according to some authors, V. b. bosniensis and V. b. sachalinensis should have the status of a separate species. Bosnian populations belong to the subspecies Vipera berus bosniensis (Boettger, 1889).

Adder is the most widespread terrestrial snake. We can find it in most of northern Europe, the UK, western and central Europe and the Balkans where populations are mostly, but not always, limited to higher altitudes. It is absent from the south of France and the Iberian Peninsula. In Asia, it stretches far beyond Russia, northern Kazakhstan, China, Mongolia, North Korea to Sakhalin - an island in the Russian far east. Adders are snakes that can be found even within the Arctic Circle and are therefore unique in that aspect. In Bosnia and Herzegovina, they are mostly found in the mountains, but there are several fragmented and endangered lowland populations in Posavina.

Adders are snakes with a thicker body, weighing 50 to 180g. They usually grow up to 65cm, rarely up to 80cm. Maximum lengths vary from region to region, and the longest specimens (over 90cm) are mostly recorded in Scandinavia. Females are larger than males. They have a flattened snout (straight, mostly not raised). Most adders have a clear zigzag line on the back, and are usually without a pale center line (as with some other similar vipers). In rare cases, the zigzag line is straight-edged, dashed, pale, or even absent. It usually has two dark V-shaped stripes on the head and dark stripes on both sides of the head that extend from the eye to the neck and continue in a row of dots on the sides. Supralabial scales are white. The nostrils are large and in the middle of the nasal scales. The basic body color varies: males are very contrastingly colored (especially in spring), usually whitish or pale gray with intense black patterns. Females are brownish or reddish with dark patterns. There are other color combinations (gray-brown) and completely black (melanistic) shapes are possible. In cold areas 50% of the population can be melanistic, and in mountainous areas the population of B&H is approximately 1:4. These individuals are treated as prester forms. The young are often reddish. The belly is gray, gray-brown, black, sometimes with white spots. The tip of the tail is yellow, orange or red underneath. Along the middle of the body they have 21 rows of crested scales.

Mostly active during the day, especially in the north. In the south, adders can be active at dusk or even at night during hot summer days. It is mainly a terrestrial species that lives near the ground, but rarely climbs shrubs and lower trees in search of prey or a good place to bask in sun. They feed on small mammals, birds and lizards, sometimes earthworms and amphibians. Juvenile adders feed on young mammals, small lizards, frogs, spiders and worms. When they grow to about 30 cm, the diet begins to resemble that of an adult.

They are usually not aggressive, mostly quite calm and bite only when feeling alarmingly threatened. People are mostly bitten if they step on it or if they try to catch them. After the first sign of danger, adder flees, but returns to the same place when the danger passes. Sometimes they warn by loud hissing and this is done primarily by pregnant females. They lift the front of the body and bend it in an S-shape in preparation for the attack. The venom is cytotoxic and very potent - it causes local swelling, bleeding and necrosis in prey. There are usually no serious consequences for humans, except in the case of a severe allergic reaction ie. anaphylactic shock when nausea, vomiting, diarrhea, sweating, fever, swelling of the face, throat, suffocation and rarely death occur. The vast majority of people experience local symptoms - swelling, pain, tingling, tenderness of the bite site, inflammation and redness. Sometimes the wider area of ​​the bite swells and turns blue, but the symptoms disappear in a maximum of 24 hours. Necrosis in humans generally does not occur. Bites are rare and complications are even rarer. However, if a bite occurs, you should definitely consult a doctor.

It is found in very diverse habitat types, especially in the north of the distribution, which usually have slightly higher humidity. We can find it near ponds, on plains, and open forests, field edges, hedges, near roads, water bodies, cultivated areas, fences, gardens and houses. In the south, it is more common in mountainous areas, including mountain meadows up to 3000m above sea level. As a rule, it is reluctant to share the habitat with the nose-horned viper. The complexity of the habitat is very important for the adders, it must enable sunbathing, but also hiding spots due to scavenging, hibernation, but also protection from predators and humans.

They are adapted to life in cold regions and hibernate in winter. In the north of the area up to 9 months a year. During extremely warm winter days, they wake up and go out in the sun. About 10% of adults and 30-40% of juvenile adders die during hibernation. Mating occurs a few weeks after hibernation (April-May). Females usually mate once every two or three years. Males can follow the female for days by smell. More males can follow one female, so they often fight with competitors by lifting the front of the body vertically and trying to knock down the opponent. This lasts until one of them gets exhausted and gives up. Courtship takes place right after, the male wraps himself around the female, wagging his tongue and twitching his tail. The male and female stay together for 1-2 days and mate several times. Females sometimes mate with more males in one season.

Unlike most egg-laying snakes, vipers carry fertilized eggs in their stomachs, and they give birth to live offspring wrapped in a thin membrane that they pierce immediately after birth. This is how the genus Vipera got its Latin name - vivus (alive) + pario (to give birth). At the end of the summer, they give birth to 3-20 snakes about 20 cm long, which are immediately able to take care of themselves. The first shedding takes place in 2 days. Although adders do not take care of their offspring, the babies often stay close to the mother for the first few days.

This species is listed in Annex III of the Berne Convention. Globally, according to the IUCN, it has the status of the least concerned (LC) species, and the same is true for Bosnia and Herzegovina - it is relatively common and widespread.